What is eGov AppStore ?
Answer:

With the vision of accelerating delivery of e-services as envisaged under NeGP and optimizing ICT spending of the government, the Government of India has launched the initiative of establishing the e-Gov AppStore. The e-Gov AppStore is a national level common repository of customizable and configurable applications, components and web services that can be re-used by various government agencies/departments at Centre and States, which will include the setting up of a common platform to host and run applications (developed by government agencies or private players) at National Clouds.

Following are the objectives for setting up the e-Gov AppStore:

e-Gov AppStore has features which allows private agencies including SMEs to provide details of their good applications which may be adopted by states/departments after due trials. Application developers for the public sector will be able to promote successful applications for replications across interested states/departments. Additionally, it provides opportunity to private players to showcase products relevant to public sector in delivering citizen centric services. Interested users may provide feedback on the products developed by the private sector for enhancement /additional features for adoption by willing states/departments. Further, public and private sector agencies may share concepts, ideas and requirements on applications which would aide public service delivery.

The e-Gov AppStore has the following features:

The e-Gov AppStore will be implemented in a phased manner over a period of time. In due course, a complete eco-system will be established (including mechanism for funding, charge back, contract management, SLAs) and will become a part of the GI Cloud initiative under Government of India.

How to browse applications?
Answer:

How to sort applications?
Answer:

Published applications can be sorted based on different criterion like Sector, order (Ascending and Descending), Title, Popularity, Rating, Last Updated, Most Recent, Web based, Mobile App, Component, Web-service, Government and Private by putting appropriate filter in the panel above.

How to search for an application?
Answer:

An application can be searched based on a key word. Search can also be performed on the basis of sectors, application type, Government, Private etc.

How to view application details?
Answer: 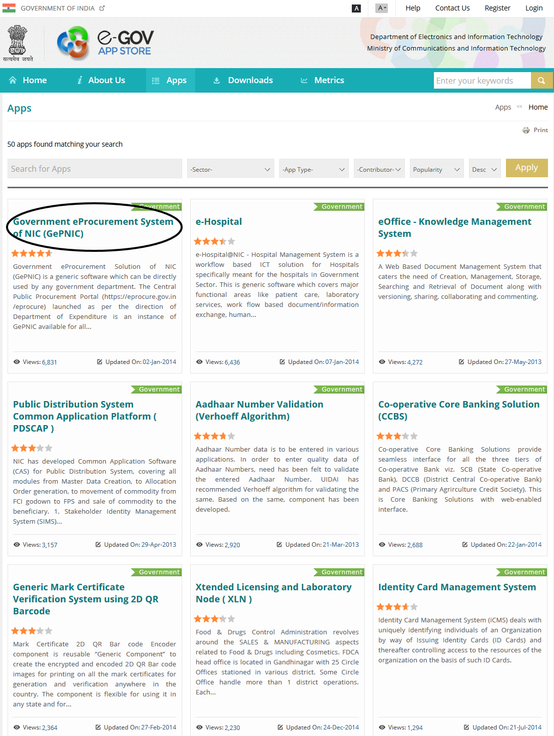 What is a downloadable application?
Answer:

Downloadable applications are those which can be downloaded from the AppStore. These applications can be installed and used with some level of customization.

How to use a downloadable application?
Answer:

To use a downloadable application:

What is a runnable application?
Answer:

Runnable applications are those which are made available from the central servers on cloud or otherwise by the application provider. These applications can be used with some level of customization.

How to use a runnable application?
Answer:

To use a runnable application:

Will my comments be read?
Answer:
What if I am having difficulty downloading an application/product?
Answer:

Some web browser configurations, particularly those that are designed for high security computing environments, can interfere with access to certain applications/products. This is most commonly related to government websites that use security certificates, and end user browsers that are not configured to recognize those certificates as being authoritative. If you are having difficulty downloading one or more applications/products from the e-Gov AppStore Portal, please contact us to determine whether browser configuration issues can be addressed for your workstation. Alternatively, you may also send your comments using various options such as ‘Contact Us’ and ‘Feedback’.

How did you determine which apps are the highest rated?
Answer:

eGov AppStore Portal takes average of all the ratings and accordingly decide the highest rated app.

This Website is designed to meet priority 2 (level AA) of the Web Content Accessibility Guidelines (WCAG) 2.0 laid down by the World Wide Web Consortium (W3C). Part of the information in the Website is also made available through links to external Web sites. External Web sites are maintained by the respective agencies that are responsible for making these sites accessible.

If you have any problem or suggestion regarding the accessibility of this website, please use the 'Feedback' or 'Contact Us' page to enable us to respond in a helpful manner.

a)Accessibility Features
Features incorporated in the e-Gov App Store Website to make it accessible are:

b)Accessibility Options
Use the accessibility options provided by this web site to control the screen display. These options allow changing the text size and color scheme for clear visibility and better readability.
Changing the Text Size
Changing the size of the text refers to making the text appearing smaller or bigger from its standard size. There are five options provided to you to set the size of the text that affects the readability. These options are available right on the header section of the Home Page:

Note: Changing the color scheme does not affect the images on the screen.

Where can I get the brochure?
Answer:

PMU will evaluate each application/ component/ web service/ mobile app (including any updates) you submit to determine whether it complies with this agreement (which includes the Certification Requirements) and policies made available to you (if any). NIC will not make any Application/ component/ web service/ mobile app available in the eGov AppStore unless and until it is certified by PMU.

You are solely responsible for providing all content made available through your application/ component/ web service/ mobile app, including the name, trademarks, logos, icons, titles, product descriptions, documents, brochure, photos and screenshots that is provided to eGov AppStore.

What is the process of publishing an application in eGov AppStore?
Answer:

Publishing an application in the eGov AppStore is a three (3) step process:-

How to contribute an application in eGov AppStore?
Answer:

Following are the steps to contribute an application in eGov AppStore:-
i. Register with eGov AppStore website.

ii. An email will be received on registered email ID will a link to activate the account and generate password.
iii. Provide credentials (username and password) to login.

How to validate/approve an application in eGov AppStore?
Answer: